Do you know which is the star dish of Canarian cuisine? It's called "Papas arrugadas con mojo" - wrinkley potatoes with spicy pepper sauce. They are considered one of the most unusual dishes in all Spanish cuisine, and a very exotic dish, especially for tourists or even Spaniards who aren't born in the Canary Islands. 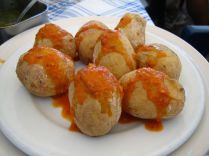 The dish is made from small new potatoes (the smallest the cook can find; if not, they will miss their supposed flavor and they will not absorb all the sauce). They are cleaned (but not peeled), then boiled in water (originally in seawater, but it is more usual that salt is added to the water in the boiling process) and then baked in their skins until they become shrivelled. Alternatively, in some recipes, after cooking in salted water most of the water is discarded and the small amount that remains is boiled away until the potatoes become dry. This leaves them with a characteristic dry salt crust on their skins.

Mojo sauce (Spanish pronunciation: [ˈmoxo]) is the name, or abbreviated name, of several types of sauces, varying in spiciness, that originated in the Canary Islands. It is predominantly either a red (most common), green or orange sauce.The basic recipe consists of olive oil, large amounts of garlic, paprika, and cumin. Flavorings such as vinegar, lemon, orange or lime juice may be added. Apart from its use for the potatoes, it can be also served with fresh bread rolls at the beginning of a meal.

So now you know - if you want to find out if you are in a typical Canarian restaurant, ask the waiter for Papas con mojo. Bon appetite!