There is so much more than beaches on Gran Canaria and you should save at least one day of your holidays to see the interior of the island with its picturesque villages to learn more about it's history and traditions.

Did you know that the original inhabitants were aborigines called Guanches and according to the legends they had light hair and blue eyes? There is evidence they were on the island already in the VIIth century. The island was then called Tamaran and the Guanche people were very brave and proud; during the Spanish conquest in 15th century they preferred to jump off the biggest cliff rather than be defeated by the Spanish. 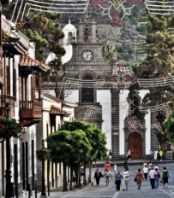 The basic part of modern Canarian traditions and folklore are the typical Fiestas in each village. Each village has a specific dates to honour and worship their Saints and use this opportunity to organise celebrations for all the inhabitants. It takes several days or even up to several weeks, but the most important day is usually the day of the pilgrimage when everybody offers to their Patron or Patroness the best of the harvest (you can see a lot of flowers, local fruit and vegetable and of course almost always the star fruit of the archipielago - Canarian banana).

All the people wear the typical Canarian costume and dance the traditional Canarian dances to the sound of guitars and "timples" which are the typical Canarian instruments. Also on 30th of May you will see everybody dressed in the traditional Canarian costumes. It is a big day for the whole arghipelago - "Canarian Day" which commemorates the first session of the Canarian Parliament on 30/05/1983 when according to the new laws Canary Islands got the status of one of the autonomous communities of Spain.